Nalacs and CEDLA in collaboration with Peace Brigades International – The Netherlands, are organising the first 2020 edition of the ‘Dialogues with Civil Society’ series. This time we will discuss threats to academic freedom in Latin America together with David Gómez Gamboa, a human rights defender from Venezuela and founder of the NGO ‘Aula Abierta’.

While academic freedom and university autonomy are legally and constitutionally recognized in Latin America, efforts of governments to undermine it have become a major threat to democracy in many countries in the region. Critical views are easily condemned as alleged “plans to destabilize the government”. Autonomous institutions supporting critical views and open debates are subject to persecution and financial restrictions while universities in line with governmental ideology are supported by the government. What are the consequences when critical thought is being restrained in a particular country? And what will happen if critical academics are forced out their country? David Gómez will tell us about his experience as human rights defender on the topics of academic freedom and quality of education. He will discuss his work in the context of challenges to overcome the threats against academic freedom in Venezuela and the whole of Latin America.

David Gomez is a human rights defender from Venezuela and founder of the NGO ‘Aula Abierta’. He is also professor in human rights and the coordinator of the Human Rights Commission of the University of Zulia. Since 2002 he has developed an international background on human rights research (with NGOs and Universities) and he represents Venezuelan and Latin American civil society before the Inter-American Commission on Human Rights System and some Universal Human Rights System bodies. In February 2019, he participated in the first hearing for The Americas on “restrictions and reprisals against academic freedom and university autonomy”, at the 171st session of the Inter-American Commission on Human Rights (IACHR) held in Bolivia. 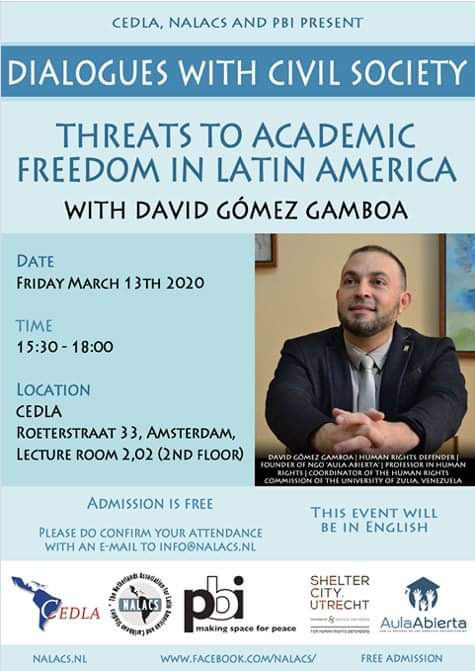