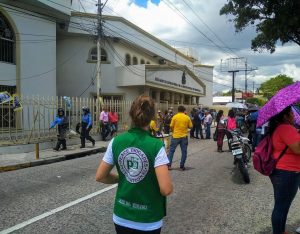 38 years ago, on September 4, 1981, the international human rights organization Peace Brigades International was founded. During the three-week meeting on Grindstone Island, Canada, the participants Raymond Magee, Lee Stern, Henry Wiseman, Murray Thomson, Narayan Desai, Gene Keyes, Charles Walker, Dan Clark, Mark Shepard and Jaime Diaz discussed among other things the experiences with non-violent actions, the role of international peace brigades in armed conflicts as well as non-partisanship and thus created the foundation for the organization. The fact that no women took part in this meeting was deeply regretted by all participants.

The protocol, published later, states: “We are forming an organization with the capacity to mobilize and provide trained volunteers in areas of high tension, to avert violent outbreaks. Peace brigades, fashioned to respond to specific needs and appeals, will undertake nonpartisan missions, which may include peacemaking initiatives, peacekeeping under a discipline of nonviolence, and humanitarian service. We are building on a rich and extensive heritage of nonviolent action. We are convinced that this commitment of mind, heart, and dedicated will can make a significant difference in human affairs”

Today Peace Brigades International is a global organization with an international office in Brussels, seven field projects working directly with vulnerable human rights defenders and 13 country groups around the world.